I got a new book but it was too big.  Too heavy to hold in my lap, too bulky to carry around, unweilding in my purse.  It was a very bossy book.  This is my solution and I've used it several times since and I like it so much I thought I would share it with you.

Warning: This post contains graphic descriptions of book abuse. I understand that people can be squeamish about their books. I have seen friends become more alarmed over what I’m about to say than television images of oil-soaked baby ducklings. And, if that doesn’t break your heart, nothing will.

I love books as much as you do.  But I also have a good grasp of who is in charge here.  I bought the book with my own money. It's mine, I can do what I want to with it. I have a good reason for what I am about to do. And, finally, if you look at it the right way, I will actually triple the value of the book. I also don't do this with just any book I own, only the really fat, heavy ones.

I started slicing my books up on a vacation when I was reading a paperback I had found in a airport. I was a mindless biography of a fairly forgettable movie star and  I was going to throw it away when I finished.  But the trip had been long and I was getting tired of holding the book.  So I tore out all the pages I had already read.  And commenced to just tear out the pages as I continued to read. That was when I lost my fear of books.

It was the last Harry Potter book that did it.  At 607 pages it weighed over 2 1/2 pounds.  That's a bulky and heavy book.  I got tired just holding it in my lap.  And I was about to leave for a youth retreat where I might end up carrying it around the dorm while I did hall duty after curfew.  I hit upon the idea of slicing the book into thirds.

This meant that not only could I lessen the weight and read only one part of the book at a time but I could then loan out the other 2/3 of the book to two other friends.  It was a total win-win idea. My conscience was clear since I had recently been to Half Priced Books and seen an entire bookcase with Harry Potter books selling for 25 cents. A used Harry Potter was basically useless, little more than trash.

Here's what I ended up with. 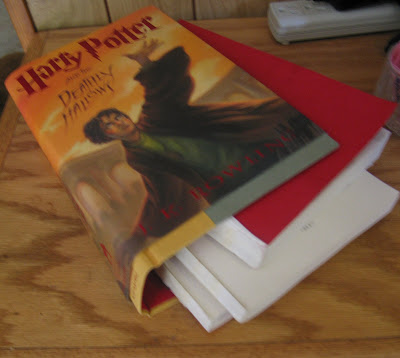 Sure enough, I was able to make two other people happy while I read my section.  We traded around.  When I got home I wrapped it up with a rubber band and put it on my shelf.

Next I tackled paperbacks.  They're a little harder since they aren't bound the same way.  The middle will need special handling.

The first one I sliced into thirds was Hamilton. 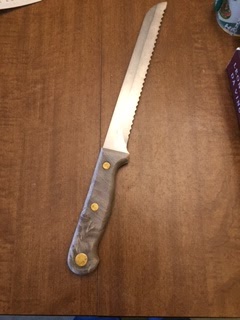 You will also need a sharp razor knife and clear packing tape. And a large serrated kitchen knife. 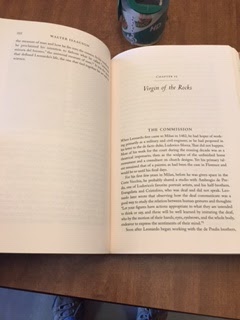 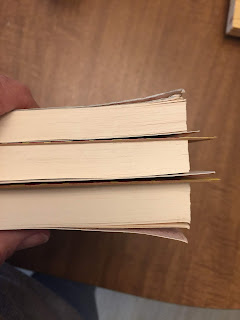 Divide the book into thirds.  IMPORTANT:  Make sure each third starts a new chapter.  Sometimes a new chapter starts on the left side as the book is open.  You don't want that.  Start section two and three with a new chapter on the first page.

Lay the knife between the pages and close the book on it.  Slowly and gently work the knife against the spine of the book, slicing through the spine until you have sliced the book in two.  Repeat for the third section. 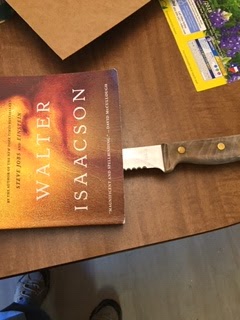 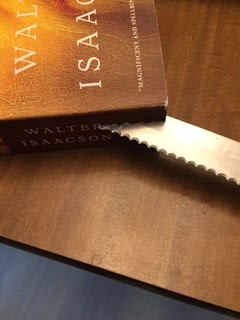 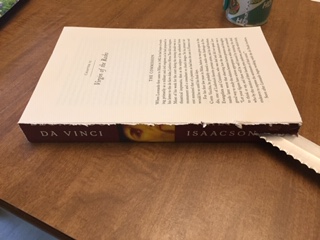 Now that you have each third in a smaller and easier-to-manage size you will need to create new covers for each section.  I have found that old phone book covers work best.

Lay the book sections on top of a page of phone book cover and trace around it.  Pay attention to what you're tracing:  this will be the cover for your book section and you will have to live with it.  If you select a section that has an ad for a bailbonds company on it you might regret it.  This is going to be the face of your "new" book.  Consider your options.  Cut out the cover for your new book section.


My technique calls for a delicate and respectful touch. If you’re going to cut a book into thirds you’d better know what you’re doing. You can’t just go hacking away at it willy-nilly. If it’s a hardback you have to get the cover off. It’s a little bit like skinning a deer. Find the point where the back meets the spine and make an incision down the inside of the spine on either side. This will separate the cover from the guts. Next, divide the book into thirds but, again, you have to be careful how you do this. You’ll want to find chapter breaks where the new chapter starts on the right-hand side. Then you take a long serrated knife. Lay the blade flat and close the book over it. This will guide the knife so it doesn’t cut into anything besides the back. Voila! When I finish I keep it all together with a rubber band. In the case of Harry Potter three different people now are able to read the book at the same time, saving the world a total of around $60 by not buying three more books.